I’ve added a new menu link: Gallery, up at the top ^^ there. Ronnie Renton from Mantic Games kindly gave me a copy of the fantastic DreadBall. It seemed rude not to have a go …

Life can be full of mayhem sometimes…

For example, who would want to be stuck on the KEMBALT-39? Take a look here for more details!

I took these near Glossop (in the NW of England). I thought funnel webs were only supposed to live in the SE of the country?

Sometimes life tries to throw as much as it can at you – during such days getting time to update the site / muck about online can be a struggle to say the least. So …

I’ve added a new tab up at the top bar, helpfully called: ‘Buy stuff’ which links to Amazon. What does this entail? You can look at / buy some stuff selected by me / look …

Click here to read a preview of the first chapter from Rispin Quill, The Dragon Tongue.

Yes, it may very well be your lucky day! 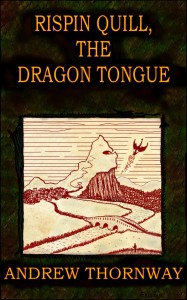 Permanent link to this article: http://andrewthornway.com/?p=14

At last! After all the moaning, the new site is finally up and running (in a decent beta build, anyway).

After many faithful years, the old pages are no more – all gone, however here we are now (almost), settled in the new place, kicking back with a cup of tea and our feet up on the unpacked boxes. (And hoping nothing got too badly broken during the transit.)

Why the change? I thought it was time to house my writing and music under one roof. The old URLs (www.thedragontongue.com and www.thecrystalsuite.com) still work, they’ll take you to the relevant page up there ^^.

Right, better get back to it! Thanks for dropping by and having a read.

Permanent link to this article: http://andrewthornway.com/?p=1