The Kindle Paperwhite is almost here

I had a good go with Nintendo’s latest console, the Wii U this afternoon at the Play Expo in Manchester – I’m sorry to say I didn’t think too much of it.

The main problem the Wii U has is its new ‘tablet’ controller. Demonstrators cheerfully called out, asking if anyone wanted to play a game with Nintendo’s groundbreaking invention; much to their embarrassment, most people didn’t.

It seems when you do play with the hottest development in gamepad technology, you’re relegated to ‘helping’ other players, rather than actually playing the game itself – except for ZombiU, where the tablet’s screen shows a radar. Regrettably though, I forgot about that bit straight away (which, thinking about it, doesn’t bode well for the whole multi-screen idea), so I ended up eliminating the pursuing undead using only the TV in front of me for eyeball guidance – all the while wishing I was using a less weighty, better contoured, controller.

The situation reminded me of being back in the day when you’d be round one of your friends’ houses and everyone would be bickering as to who got the ‘proper’ branded joypad, and who got the cheap ‘dad got this from the market, but it’s just as good, honest’ one. Best of luck with all those arguments this Christmas. I’m sure games will be made for it, but at the moment it comes across as being very gimmicky and the ugly sister to the old faithful (and far cheaper) Wii wands. 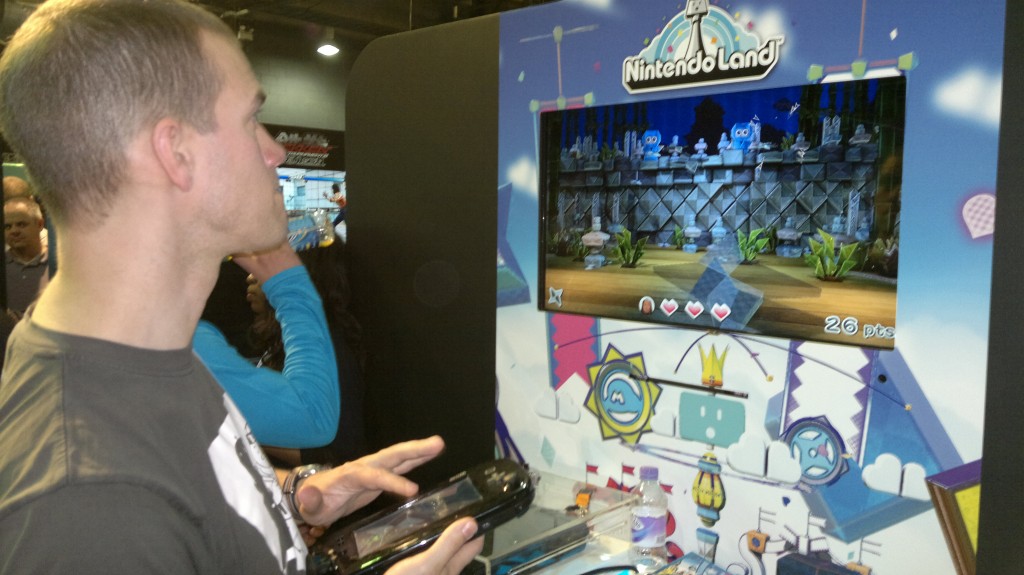 Mr. Parablax on the Wii U

Another problem I experienced with the Wii U was the game load times. I’m not quite talking ‘homage to the ZX Spectrum’, but it was a close thing. Nearly all the Nintendo demonstrators apologised for this, squirming variations of: “I’m really sorry, I don’t know why it’s taking so long…” Maybe the software will be tweaked before launch; I really hope this is the case – and that the console’s CPU isn’t to blame.

Another gripe: if you ever played Pod Racers on the N64, you’ll remember the demoralising disappointment as the contests crawled along. (If you played the same game on the PC, it flew – it was amazing and a true predecessor to the Burnout / Need for Speed series.) Well, that crushing feeling’s back with the Wii U’s version of Tekken. Your fingers rocket around on the controller, only for nothing to happen on screen. The characters move, but only in slow, soul-killing motion. This wasn’t helped by having a PS3 Tekken Tag Tournament 2 stand nearby, where you could see how the game runs on planet earth.

I’m sure the Wii U will sell by the bucket load as parents buy their kids the latest gizmo for a present. If the family’s happy with having an HD Wii, then that’s great. The graphics do look good – on par with this generation’s PlayStation and XBox. I like the fact you can use your old Wii controllers, but overall, there was nothing inspiring; no spark to the machine. I can’t say I’m that keen to get one and I wonder how well this console will sell next Christmas when the new PlayStation and XBox hit the streets.

Enough negativity. What good stuff did I see / have a play on? Well, retro games wise, Street Fighter 2 on the Super Nintendo was as great and fun as I remember, and then on to possibly my favourite cabinet game ever: Phoenix, which always gets a 10/10. [There was no sign of Rastan, Robocop or the fantastic, huge, four player Teenage Mutant Ninja Turtles game. I hope this is addressed for next year!]

The new stuff… Halo 4 looked very impressive on the 360 (one of the maps looked very ‘Bespin’ like, so who wouldn’t want to have a go on that?). Next up Tekken Tag Tournament 2 on the PS3 – which is a far better game than the depressingly poor Tekken 6. It’s very fast, beautiful to look at and finger achingly addictive. Need for Speed Most Wanted was very playable, however was also somewhat ‘Burnouty’ to me. (Not a huge shock there considering both games are from the Criterion stable.) I do wish ‘street racing’ games would have the option to turn the bumper-car options off, though. I just want to press ‘start’, have my car appear at the line, then ‘go go go’. I don’t understand why anyone would want to have to find the race’s starting point. Please – enough of the ‘sandbox’. (Or give me the option to turn it off.) I’m also not bothered about the crashing. Some crashing is fun, but if I want to play a racing game I want to race, not to stockcar race / do speed camera runs / longest jumps, etc. Make no mistake, when you do race in this game, it’s good – I just wish there was more of it.

The game that stole the show? Probably Studio Ghibli’s Ni no Kuni, which looked stunning and very intriguing. Want.

Permanent link to this article: http://andrewthornway.com/?p=729